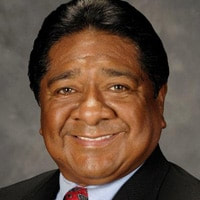 Daniel “Danny” James Tucker, a tribal member of Sycuan, has been involved in Native American politics for most of his life. At 18, he served as vice chair with Chairwoman Anna Prieto Sandoval during the development of Class II high-stakes bingo on Sycuan. Tucker was tribal chair of Sycuan for most of the development of Class III Vegas-style gaming and served for fourteen years (1993-1996 and 2003-2014). Tucker was chairman of CNIGA (California Nations Indian Gaming Association) during key Indian gaming propositions in California. Prop 5 (1998) was crucial because it forced reluctant governors, like Pete Wilson, to enter into compacts with Indian tribes and Prop 1A (2000) changed California’s constitution to permit Class III gaming.

Tucker was vice chairman of NIGA (National Indian Gaming Association) with Chairman Rick Hill and they flew all over the country doing radio interviews, TV interviews, and lobbying congress. As Tucker explained to me, “a lot of people don’t know how much we actually did.” For instance, during the Senate Select Committee Hearing in Indian Affairs in 1993, Tucker fought successfully against Donald Trump with a bill called the “Donald Trump Protection Act.” Trump was attempting to repeal IGRA and complained the Indian Gaming Regulatory Act was unconstitutional after his casinos went bankrupt in Atlantic City. As chairman of Sycuan, chairman of CNIGA, and vice chairman of NIGA, Tucker was at the head of the bargaining table during the Gaming Wars of the 1990s. He has worked with several important tribal attorneys such as, Art Bunce, George Forman and Glen Feldman. Tucker has also worked with several
important California governors over the years, such as Pete Wilson, Grey Davis, and Arnold Schwarzenegger.

A moment in our interview that stood out to me, was the meeting between U.S. Attorney General, Allen Bersin, Chairman Danny Tucker, Chairman Clifford LaChappa and Chairman Anthony Pico. Art Bunce would tell me later, this was a pivotal moment in Indian gaming history because Bersin’s actions would prevent Sycuan, Barona, and Viejas, from being raided or shut down from 1995 to 1998 – the crucial “compact negotiation” years. On a handshake, Bersin told the three chairmen, “no more machines in San Diego County until all
litigation and all legislation stuff is done.”

When I asked Danny to be interviewed, he went above and beyond to help me out with the Kumeyaay Oral History Project. Barona and Sycuan have a parallel gaming history and I was eager to get the “other” side of the story. Especially, the similarities and differences with Anna Sandoval and Joe Welch, and the development of Class III gaming. In the last minutes of our interview Danny demonstrates his eagerness to share our story when he states, “we are not done yet.” Suffice it to say, Danny is a very giving and knowledgeable tribal leader.

The Emmy Award-winning documentary, Our People. Our History. Our Culture.
produced under Danny Tucker's leadership
Emmy award winning Our People. Our History. Our Culture. tells the story of Sycuan and the Kumeyaay nation through the words of its people—Tribal elders, Council leaders, family members and the next generation. Augmented by incisive observations from Native American historians and a range of subject matter experts, this documentary follows the incredible 12,500 year journey of a People who has survived against overwhelming odds to become a sovereign, prosperous nation who continues to honor its past while building its future and positively impacting their community.

Documentary by Loma Media
Support Us